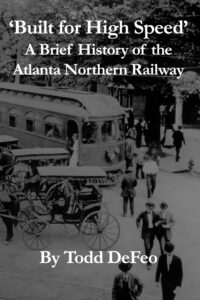 Author Todd DeFeo will talk about the Atlanta Northern Railway, the subject of his latest book, to the Smyrna Optimist Club. The talk, titled “Smyrna’s Streetcar: The Atlanta Northern,” will focus on the former interurban line that ran between Atlanta and Marietta from 1905 to 1947, its impact on local communities and its legacy.

DeFeo has studied railroads since growing up alongside the Northeast Corridor line in New Jersey. He is the publisher and editor of Railfanning.org and the founder of The DeFeo Groupe. Today, he lives near the historic Western & Atlantic.

He has written several railroad histories, including books about the Western & Atlantic and the Memphis, Clarksville & Louisville railroads. His new book highlights the largely forgotten history of the Atlanta Northern Railway, which ran between Atlanta and Marietta and passed through downtown Smyrna.

DeFeo is an avid traveler, photographer and amateur historian. But, DeFeo has made a habit of mixing business and fun. In 2002, he launched Railfanning.org, one of the most popular websites dedicated to the hobby of train-watching. DeFeo is also editor of Sightseers’ Delight, a travel site.